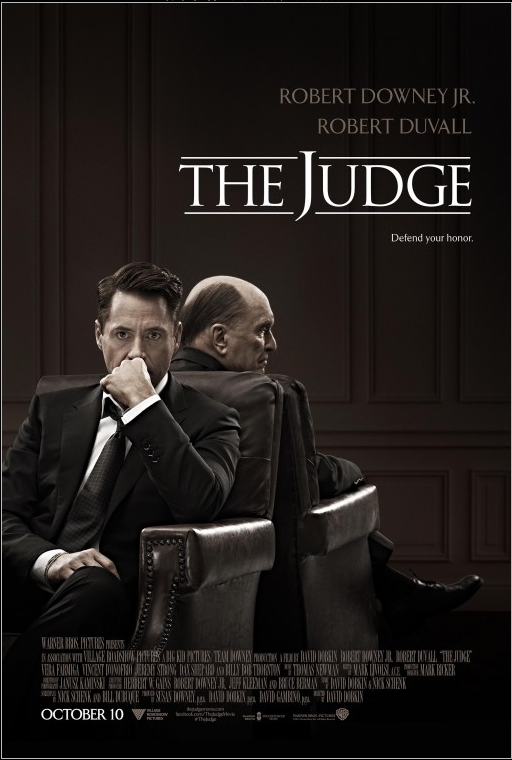 My wife and I watched a really terrific movie this weekend starring Robert Downey Jr. and Robert Duvall called The Judge.

The storyline is ripe with clichés, but the performances are excellent. In the movie, Downey plays Hank Palmer, a successful defense attorney from Chicago, who is beckoned back to his estranged home by his older brother by news of his mother’s passing.

He returns to the town of his upbringing, a fictional town of Carlinville, Indiana, which he hates, but not as much as the town’s judge, who happens to be his father (Duvall).

The story is ripe with the age-old tale of a dysfunctional family with the hard-ass father and the banished son.

However, the course of the story changes due to an unexpected twist in the story, where, Judge Palmer, who has been a fixture at the courthouse for the last 42 years, ends up being charged with first degree murder.

Due to the bad blood in the family, Judge Palmer would rather be dead than have his son Hank represent him, so they head off to seek legal counsel from a local attorney who works most of the time in an antique consignment shop.

If you ask yourself what kind of attorney works mostly in an antique consignment shop, you can imagine the quality of that legal representation.

The judge has a Secret

It turns out the judge has a secret that he has been keeping from the family, which is that he has Stage 2 Colorectal Cancer. This ends up playing a significant role in the movie, but I will let you learn more about that when you watch it for yourself.

So, today, let’s look at cancer…

(WARNING: I have had several people in my family and my friends have cancer, and it is a very sensitive topic for many people. Therefore if you are the type of person who might take offense to the idea that cancer may be exacerbated by life choices and thoughts, this post may not be for you. It is certainly not a substitute for medical advice, etc., but if you have an open mind and are interested in expanding the possibilities of care… read on.)

Something you need to know about cancer is that you don’t ‘catch’ cancer like and infection, it is something that happens from within.

Cancer cells normally appear in your body, but a healthy and properly functioning system can keep these in check and harmless.

When this balance goes sideways, the result is cells that decide that their environment is no longer acceptable, which therefore begin to mutate with a voracious appetite to take over.

As all dysfunctions in the body start at the conscience level, it is important to first look to the person’s thinking and life demonstrations as they are most often the culprit.

There are some other possibilities too included in what I call The 3 Paths, but I cover that in another piece. This gives us good cause to look into what metaphorical wisdom cancer has to teach us.

All dysfunction in the body starts with our thoughts

Cancer comes from a deep desire to break free from the identity of the home surroundings, yet not engaging with the courage to verbalize these feelings and take action in a healthy manner.

Typically, the feelings are just stuffed down with hopes of suffocating them as it is too painful to have these feelings and not do anything about them.

My mentor, Luis Martins Simoes writes, “There is no space for cancer when the person respects himself just as he is, in his essence, fundamental nature, when the person does not exaggerate or annul anything in him.”

Fighting cancer only increases its strength

It is wise to note that fighting cancer only increases its strength.

It is inner strength and respect that must be cultivated in order to successfully navigate the lesson cancer has to give us.

Where the cancer is in the body must also be taken into account, as it gives us direct insight into the theme around what is being hidden and suppressed.  In the judge’s case, it is cancer of the colon.

The colon is the final stage of digestion just before the process of elimination takes place.

In nature, elimination is good and healthy and is part of how the earth gets its nutrition. But from a human’s stigmatic perspective, it is dirty, filthy and a threat for disease.

Biologically, the colon acts not only as the final resting place for what has been digested, but also as the place where life-giving water is reclaimed and extracted back into the body for use.

This is a very important distinction, as water is vital for life force.

Symbolically, the colon is the last part of a process that gives life, being your nutrition.

When you have a dysfunction of the colon, it is related to the harbouring of beliefs around believing that your life’s experience is really of no value to anyone else.

You would rather ‘keep your shit to yourself’

You would rather ‘keep your shit to yourself’ and not worry about polluting the world with your experience.

If there is rage, suppression and disgust that amplifies the above feeling, then the circumstances for cancer of the colon to take hold.

Someone who experiences this must look for ways to resolve the inner rage at remaining in a situation they hold in contempt (to draw from the courthouse theme).

The judge certainly fit this description, embodying decades of contempt for his son Hank and certain people who stood before him in the court.

He continued to stuff down his expression of love, thought it better to be a tough-love kind of father, with a sickeningly proud attachment to never changing his mind or apologizing for his past actions.

Interestingly enough, near the end of the movie, there is a point where you will be introduced to the concept of “Compassionate Release”.

I won’t give the story away, but I will tell you this…

Compassion is the way out

Compassion is the way out of the inner pain and emotional dysfunction represented by colon cancer.

By learning what it means to have compassion for one’s self, the ability for vulnerability, healing and a new self-identity can emerge.

A big shout out to an old client of mine for recommending this movie to watch… thanks Jenn, I really enjoyed it.

Let me know in the comments below.