How to Spot (and help) Someone Who Suffers from Woundology

The last couple of posts I’ve done have been around the idea of curing vs. healing and some reasons why some folks just don’t seem to get better. I had mentioned a term, woundology, coined by Carolyn Myss in her book, Why People Don’t Heal and How They Can.

If you want to know how to spot someone who suffers from woundology, I think it is a good idea to get a flavour of what woundology may look like.

Let’s take a look at an excerpt from her book:

Prior to beginning the week-long workshop, I had arranged to have lunch with my dear friend Mary. Having arrived early in the dining room, I joined two gentlemen for tea. Mary entered a while later, and when she walked over to our table, I introduced her to my companions. She had just extended her hand to greet them when another member of the Findhorn community, Wayne, came up to her and asked, “Mary, are you busy on June eighth? We’re looking for someone to escort a guest coming to Findhorn
for the day.”

The tone of Mary’s response was as revealing as its length. She snapped, “June eighth? Did you say June eighth?” Suffused with anger and resentment, she continued, “Absolutely not! June eighth is my incest support group meeting, and I would never, ever miss that meeting! We count on each other, after all. We incest victims have to be there for one another. I mean, who else do we have?”

Mary went on for a while longer, but this is as much as I can accurately remember. I was captivated by the instantaneous dramatics 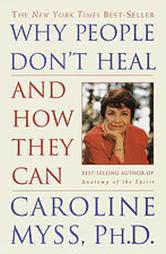 triggered by a simple question about her schedule. Wayne hardly took notice of her response, thanked her, and left, but I was astonished. Later, as Mary and I were having lunch, I asked her about her behavior:

“Mary, why, when you were answering Wayne’s question about your schedule, did you have to let all three men know that you had suffered incest as a young girl, that you were still angry about it, that you were angry with men in general, and that you intended to control the atmosphere of the conversation with your anger? All Wayne asked you was, `Are you busy June eighth?’ and in response you gave these three men a miniature therapy class. A simple yes or no would have done fine.”

Mary looked at me as if I had betrayed her. Her body stiffened, and she emphasized her words in an ice-cold, defensive tone: “I answered that way because I am a victim of incest.” She drew back from the table, stopped eating, and threw her napkin over her plate, indicating that our lunch together had come to a close. Although I didn’t realize it at that moment, so had our friendship.

“Mary, honey,” I replied, softening my own tone somewhat, “I know you’re a victim of incest, but what I’m trying to figure out is why you found it necessary to tell two strangers and Wayne your history when all he wanted to know was whether you could help out on June eighth. Did you want these men to treat you a certain way or talk to you in a certain way? What made you lay your wounds out on the table within seven seconds of meeting two new people?”

Mary told me that I simply did not understand because I had not endured what she and numerous other incest victims had gone through, but that she had expected me as a friend to be more compassionate. I replied that lack of compassion had nothing to do with what I was asking her. I could feel the separation of energy between us as I realized that in order for our friendship to continue, I needed to “speak wounds” to Mary, to follow some very specific rules of how a supportive friend was to behave, and to bear always in mind that she defined herself by a negative experience.

In addition to her painful childhood history, Mary also had a history of chronic ailments. She was always in pain —some days emotional, some days physical. Though she was kind and always ready to support her friends, she much preferred the company of people who had also had abusive childhoods. That day at our lunch, I realized the Mary needed to be with people who spoke the same language and shared the same mindset and behaviors. I immediately began to think to this attitude as “woundology.” I have since become convinced that when we define ourselves by our wounds, we burden and lose our physical and spiritual energy and open ourselves to the risk of illness.

Wow, this is sooooooo important!

Investing in our emotional (and physical) wounds can be really quite seductive. After all, pain has its privileges. It can trick someone into thinking they are taking responsibility for their situation by no longer sweeping the pain under the rug, but instead they proudly throw it over their shoulder, like a fine mantle. Slowly they begin to self-identify with it, then insidiously it begins to define them.

How to spot someone who suffers from woundology

If you want to know how to spot someone who has succumbed to woundology, look for the following signs:

1.  You can’t seem to have a conversation with them without them mentioning their wound.

3.  They declare ownership of their condition, such as Mary in the above story: “… I am a victim of incest.”

4.  Once again, they use the word “my” when referring to any medication they might be taking as a result of the condition. For instance, “I forgot to take my Paxil*.”   (*Paxil is a trademarked pharmaceutical used in the treatment of depression, OCD, anxiety, etc. that has a side effects list longer than your arm.)

5.  They will get angry or tear up simply at the mention of the wound.

6.  They tend toward defensiveness.

7.  They ‘campaign for your agreement’ with regard to their pain, then judge you for not understanding.

8.  They talk about the wound with a cold indifference, as if it is a matter of fact.

9.  They stand and proclaim the wound as fact.

10.  They repeatedly validate themselves as being (overly) responsible for the wound.

11.  They blame others for the wound.

12.  They overuse the word “process” or “processing”, as in “I’m processing”, and have a tendency to use it regularly.

This list could surely go on, yet I feel a dozen is enough to get started with.

Have I missed any?

Add yours to the mix below by adding your comments.

How to help someone who suffers from woundology

Helping someone heal from woundology takes courage, both by you and the sufferer. It is a journey and will take time for you to expand past the habit of listening to someone repeatedly revisit their wound, especially if you love them.

Here are 3 simple, but not easy, ways you can help someone become bigger than their ‘beef:’

1.  Get prepared mentally. It will take a great deal of awareness and compassion to realize you are not serving someone by agreeing to receive their story —again. Someone who is addicted to revisiting the wound they suffer from will feel slighted at some level when you decide to not play the game anymore, so –get ready.

2.  Silence is golden. When the victim of woundology comes around and you can feel them getting pulled into their story, stay silent. Do NOT offer anything, but presence. Presence is a masculine energy and emotion is a feminine energy, so allow your masculine to stay present, like the rocks on the shore, and let the waves of emotions crash down. Silently allowing the energy of those emotional waves to expend their energy may cause the storm to worsen at first, but stay still, silent and present. After it passes move on without giving it your energy. In other words, just do nothing except stay present.

3.  Apologize after the storm. Even if the storm doesn’t worsen and just stalls out, you will have a tremendous opportunity. You can share with them that you have been learning about this thing called woundology, and that you are committing to yourself to becoming vigilant in not participating in perpetuating anybody’s woundology. Apologize to them for ever allowing yourself to receive their wounded oratory because you now realize you have been harming them by doing so. This way you afford yourself the chance to squarely face the situation without it feeling like an attack.

How do you think we could help someone who has succumbed to woundology?

PS – If you’d like to know how I have successfully helped clients end their woundology,  click here. 🙂