Why Atlas Had Sore Shoulders

Last week I introduced you to what I term The Atlas Effect, the feeling that when taking on too much responsibility begins to lead to a life of tediousness and joylessness. A life where it feels like the weight of the world is on your shoulders, just like the mythological god, Atlas.

Ultimately, the beliefs behind shoulder issues connect to undervaluing yourself and then being inflexible in how that affects how you operate in your world.

As the top half of the body is in the Father Sky or Heavenly Father hemi-sphere of the the body, it leans toward the more masculine yang energies. When you think of someone’s shoulders, you will likely see them as weak or strong.

Broad, strong shoulders unconsciously gives you the sense that a person is capable, whereas narrow, weak shoulders broadcasts a sense of fragility.

The right side of the body reflects beliefs that are in the masculine and yang camp, male-type energy. This coupled with the shoulder leaves you with information about your relationship to how you get things done.

If you have discomfort and/or dysfunction in the right shoulder, it leads us to look at your beliefs behind your need to be noticed as the one who has the capacity and authority to get ‘it’ done… whatever ‘it’ is.

God forbid you should ever let someone down. This would feel like torture to you.

You likely harbour silently obsessive beliefs around goals, achievement and will-power, but always in an hyper-accountable and under-acknowledged and appreciated way.

Because you are seduced by achieving the un-achievable, you get to feel constantly shaken and beat up.

You then respond by digging in deeper and over-activating your stubborn inner-fighter, and then have a tendency to come across as somewhat harsh and arrogant to cover up feelings of likely never being enough.

In the end, you are never satiated with your performance and tend to going further than is reasonable or useful, in hopes of being noticed.

[Side note: I have a chronic right shoulder problem from when I separated it in football in grade 12. I have resolved several hundred, if not thousands, of beliefs around this flavour of seemingly latent, yet very active beliefs behind the scenes.]

Conversely, instead of aggressively asserting yourself in order to be recognized, your left shoulder represents that you would rather quietly, and without being noticed, take all the responsibility yourself.

The beliefs behind this behaviour come from being told, likely by your mother, that she would rather you do ‘it’ yourself… whatever ‘it’ is.

She was likely doing this as a perceived favour to you, as, if you learn to take responsibility for your actions early, you will certainly thank her later.

Instead, this kind of parenting leads to the development of subconscious beliefs around never wanting to bother someone who might help you (although you silently believe these people don’t exist) by asking for help or support, both practical and emotional, so you can ease your hyper-responsible burden, whatever ‘it’ may be.

You have a strong sense of not wanting to appear overly sensitive or fragile in how you get things done. Therefore, you quietly overload yourself with unreasonable amounts of responsibility in order to not burden anyone else.

Ironically, the result is that you feel overly sensitive and fragile, especially when you aren’t able to keep up with the unreasonable amount of responsibility you have bestowed upon yourself.

In the end, the major difference between right and left shoulder discomfort/dysfunction stems from beliefs around taking on an unreasonable amount of responsibility, with things that are really none of your business, and either needing to aggressively assert yourself in order to be noticed (Right side), or silently and sheepishly not be noticed (Left side).

If you have ever incurred a shoulder injury, you will know first hand how difficult it is to get things done, especially at the level at which you had performed previously. 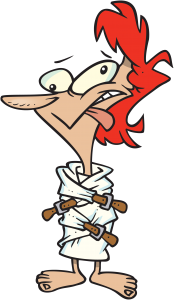 When thinking about this I get the image of a straight-jacket, which ultimately immobilizes the shoulders and what is attached to them.

Let me know your thoughts and leave a comment below.